When the podcast was recorded for Life’s Little Lessons we were using a platform that also allowed for a video version to be released.  This is the same podcast show in the video format.

Many people prefer to watch an interview rather than just listening to it.  I feel having both versions available allows to give the audience the choice in their preferred matter of consumption.

In a video interview you add in the component of personal involvement as a person shows more in their faces and body movement that you may not be able to pick up over a voice only recording.

Enjoy this version of the show and let other people know we are out here and where they can learn a little more about business and self development.

I had a great conversation with Mike McDonnell on his podcast "The ROAR Show!" After leaving the Navy to pursue a job, only to realise how insecure that route was, I decided to go on my own and start a business. After a string of incidences that caused me to… Kevin has worn a lot of hats. He talks about spontaneity speaks about just his passion and how he has reinvented himself.

About the Show I had a chance to meet with Sumedh Chatterjee and to be on his show called Sumelevate.  It was his episode 16.   It was an honor to chat with him and be his guest.  We talked a lot about mindsets and my upcoming book called The Winner's…

The Interview... Lance Beste from his show Communication and YOU takes the time out of his very busy day to interview a man from a different hemisphere and country.   Today Lance who resides in Auckland, New Zealand takes the time to interview Kevin A Dunlap from Las Vegas, NV, USA. Kevin…

Continue Reading Communication and YOU interviews Kevin A Dunlap 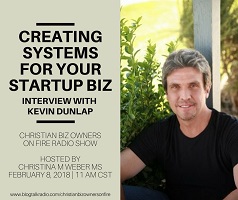 Christina M Weber interviews Kevin A Dunlap from Plentiful Perspectives on her show called Christian Biz Owners on Fire Radio Show on Blog Talk Radio. This is a short series of questions that she asked Kevin about his business and his love to helping other entrepreneurs.