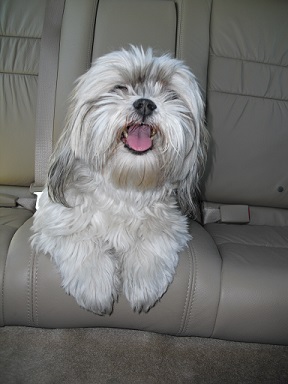 I also know of a friend who is mourning the anniversary of the loss of her husband and father of her child.

While the passing of a loved one can be tragic, in some cases it can also be liberating for the one who has passed. If they are in pain and have lived a rich and fulfilled life then it may be better to let them go to their version of heaven and the afterlife.

On her last weekend on this realm of existence I did everything I could to show her how much love I had for her. On her last day was a trip to the park. It was quite evident that she had trouble walking as her back hips cringed on each step she took.

The hardest part was the final time taking her to the animal hospital and she was so scared. I held her tightly to my chest putting her head into the crook of my neck. Saying goodbye to her as we waited for the vet to arrive was so difficult. When the orderly took her away to put in the IV I lost it. A few moments later he brought her back with her front leg taped up and the tube inserted.

A few moments later the vet came in with two needles. I told Kitty that I loved her one last time and said she was going to a much happier place than where she was now. The doctor inserted the first needle and within seconds she was falling asleep. I laid her down on the towel and petted her head one last time. The doctor inserted the second needle and then put her stethoscope to her chest. Just few brief moments and Kitty was gone.

This was the first time I have ever had to deal with the passing of someone before my eyes. Some people say they can’t do it. And I say that for me I had to do it. Kitty’s last few moments on this planet had to be respected and she had to be in the presence of someone she loved and who loved her back. I could not bare having go off alone. That would not be fair to her. Her passing has nothing to do with me and my feelings; it has to do with her and her needs. I know I want my last few breaths on this planet to be with at least one loved one.

After a couple of minutes the doctor said she is in a better place and if I needed any more time with her. I said that she is in heaven now, the great doggie playground in the sky. Her spirit and soul is there and they have left the body, her vessel, behind. I did have her cremated and today was the day her ashes were returned to me. I must admit having her box of ashes in my hand is just as painful as last week when she went to sleep.

To commemorate her life I have created a unsearchable video of the last 6 years of her life since I adopted her. Here is a link if you care to watch. https://youtu.be/iWeQ5ePBrik Please comment if you are touched by this.

I know now that Kitty has passed I still feel her inside of me. When I am sitting on the floor I can feel her nudging or licking me.

For those of you who have mourned the passing of a pet you may get what I am saying. She was like having a perpetual 2 year old daughter. Caught in that same age bracket as she ages.

Now that she has gone, I will always remember her. The lessons she has taught me and the desire to love and care for others even more.

Thank you Kitty. You were and are my closest and dearest little girl.

How to Deal with Unacceptable Behavior from a Loved One

Am I Shallow or Just Picky?!?

No Sex Until Wedding Night