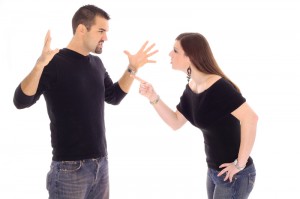 Recently I was attending a conference about relationships and a topic came up about what should somebody do if a family member or another person in the relationship was exhibiting unacceptable behavior.  This spurred an entire amount of discussion.  Everything from how to change another person’s behaviors through should I take them out of my life or what is a person to do.

Even though change is inevitable and people can change unproductive behaviors.  However there are times when people just stay in a relationship way past the time they could have just ended and continued their lives on in a different manner or capacity.  I know from my past experiences there were times I stayed in a relationship that was not at all supportive of me or my goals.  I look back and think why did I stay in that relationship.

Case in point, one time while I was a bartender I was dating one of the cocktail waitresses.  Actually, I was the one who got her the job in the first place.  We dated, then broke up.  Dated again, then broke up.  Then dated again, then broke up.  I know it must have been 10 – 13 times that we were on that seesaw of a relationship.  She even joined the Army Reserves and was to be gone for 3 months which ended up being 13.  We broke up twice while she was gone even though I remained faithful for her in the first 12 months when we finally broke up for the last time.  I realized that staying in a relationship just for the sake of being in a relationship rather than being alone (who can relate to this one?) is not a good reason to be together.

Part of my program that aids people in their relationship covers exactly that.  However, just recently at this event when the speaker was talking about the core choices that you can make there are actually only three of them.  There are only 3 actions that you can take when someone has a sense of behavior that doesn’t gel with what you want them to do.

The first two are healthy choices while the third can destroy your life.  Or at least the parts that deal with this person.  And the funny thing is most people chose the third choice.  Once I tell you what they are you will say that is common sense.  Yet, in some instances until you are told things that are common sense you don’t realize that they are.

The first choice that you can make is that you just ACCEPT their behavior.  This may be a behavior that they have had all of their lives or it could be a new one.  They may be able to change this behavior in the future yet now it is not going to happen.

By accepting their behavior either good or bad, at least now you have made a choice.

By clearing out the negative energy in your life today will help make you happier and healthier tomorrow.  I am not saying that you have to reject them forever.  It is only until they maintain that nonsupportive behavior or until you can accept it.

The third choice is probably already drifting around in your mind.  What if you are not able to accept their behavior yet you don’t want to get them out of your life.  This is why most people pick this choice.  The choice that leads to depression, frustration, and eventually just destroying your soul.

The third choice is to TOLERATE their behavior.  This means you let it bug you each time they do it.  This means you are letting it fester inside of you.  Maybe you react to their behavior in other nonsupportive ways.  Like yelling, or being passive aggressive.  This is why this is the worst choice you can do.

Thus, when someone in your life comes to you and starts doing things you deem are unacceptable and they are refusing to change that behavior you must decide what is more important.  Do you just accept them for who they are and say “I accept you in anything you do.”  Or do you say “I reject your behavior and am opting out of this relationship.”  Or do say to yourself, “I am going to make that person change and will keep resisting until they do.”

The choice is yours. 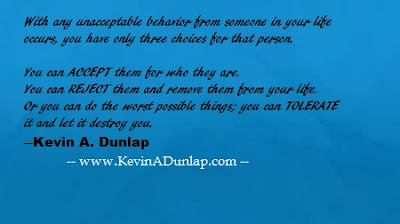 Letting Your Emotions Out is a Healthy Experience

Uniqueness and Sameness – We Are More Connected Then We May Think

Dealing with the Loss of a Loved One