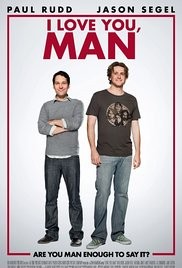 I was re-watching the movie “I Love You, Man” starring Paul Rudd and Jason Segel. This is maybe the second or third time I have seen this hilarious movie. For those of you who have seen this movie you may know it is about a man, Peter, who is about to get married and realizes that he doesn’t really have any close friends, or at least no close male friends. He tends to get along great with women but is awkward around men. The movie is, in my opinion, a well made film about going out and meeting new people. In this case a straight man going out on “man-dates” to find other men.

For me I actually identify with this guy. Most of my closest friends over the past few years have all been women. Even now I can safely say that my three closest friends now are Necole, Wendy, and Ellie. Fourth would be Mike but we don’t talk that often. He does live in another state so we only infrequently see each other (about once a year).

I have wondered about the day that I will eventually marry (the underlying theme in this movie). Who would be my best man? Do I ask my two brothers to step into one this role? Or do I ask my closest friend of over 4 years to do so? If I ask Necole to be there should I ask her to wear a bride’s maids dress or don a female version of a tuxedo? I guess overall it would be something I would have to talk with my fiancee about (by the way I am not engaged at the moment).

I wonder if it would be her brother or someone I don’t know so we can even out both the groom and bride sides. Hmmm…. Just something that I have thought about over the past few years.

Kevin A Dunlap
See more on this on Facebook: https://www.facebook.com/kevinadunlap.author.

How to Deal with Unacceptable Behavior from a Loved One

Letting Your Emotions Out is a Healthy Experience

3 Tips to Becoming a Better Communicator