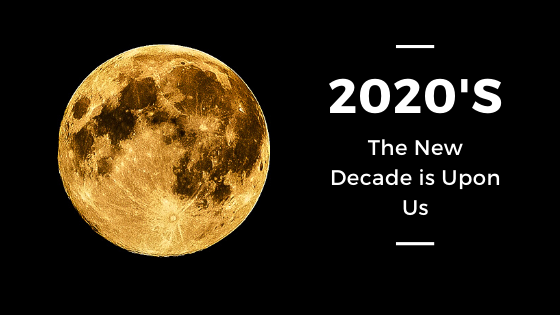 Another Year, Another Decade

Sometimes when something new happens it can take me a little while to realize it even when it is right in front of me.  Even now as we enter into the new ’20s.

This is true for me as we have just moved into the year 2020.  We are less than a week into this new year when I also started to look at this is the dawn of a new decade.

As human beings, we often think of our past in sections of years called decades.   This is often remembered in the entertainment industry.  The music of the ’80s is a lot different than that of the ’60s.

The same is seen in the film industry.  One may recall the first Star Wars movie when many years later it was released again with touchups for the films for the technology of that time.  If you were to see Star Wars in its original format you may say that it is really a ’70s movie.   Maybe the same can be seen in the TV shows of yesteryear.

Our lives can be, in many instances, seen in the same way.

The  ’90s involved both my re-integration to living in America and my 7 years of college.

While in graduate school (1996), I started to think about becoming a stunt performer.  At that time I learned to focus and become persistent in following my dreams.  I started to create opportunities that would eventually land me as a stunt coordinator on multiple independent films and stages.

In 1999 I was downsized after working on a Y2K project and I became an entrepreneur later that year.

The years 2000 through 2009 were huge and transformational for me.  In 2002, I began to listen to a series called Personal Power by Tony Robbins.  For the next year, I devoured everything about real estate and personal development.  I was a total sponge.

Even in January 2004, I sold almost everything I owned and moved from Wilmington, NC out to Las Vegas, NV to start my investment career.  Later in 2004, I started my real estate investment company which lasted 16 years.

As much growth that lay behind me was about to change with a proverbial 4″ x 4″ to the head.

This was the year I discovered live personal development courses.  February 2010 I took a course called The Basic offered by PSI Seminars.  This was a benchmark class that would forever change my life.  My eyes opened into an entirely new world of personal development and self-growth.

This decade I began to take better care of my health.  Starting in May 2010, after taking PSI Seminar’s second course, Life Success Class, I lost 60 pounds of weight in just 90 days.  And, I have kept most of it off over the next 10 years.

I took many other courses, as well.  This is when I made new life-long friends in both Las Vegas and Canada.  I started my speaking career and even wrote 3 books.  This is also when I created an international podcast called Life’s Little Lessons where I interviewed entrepreneurs from many different parts of the world.

In 2018 I even survived a stroke to the left side of my head where I learned about the importance of life, friendship, and who to trust or not trust.

Moving into the New ’20s Looking back at all of the previous decades I am happy to admit that overall they were good.

Of course, I had setbacks along the way.  We all do.  However, when looking at the greater scheme of things I can undoubtedly say that those were all good times.

All that I can say is I am not only planning on what the next year will be but also what do I want to look back at in the future to say how the ’20s went and what did I do to help create a better future for myself and those around me.

This is going to be one heck of a ride.

3 Phases for Writing a Book

Attachments – What’s Holding You Back