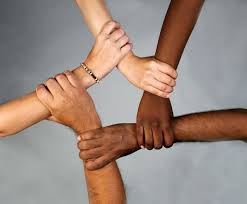 I just attended a business meeting where we did an exercise where groups of people were take to talk with each other for just a few minutes to discover 5 things that we all had in common. Since the group were pretty much strangers with each other we all shared different details about our lives.  Outside the obvious things like gender, age, or who was wearing a wedding ring things became quite interesting. There was even an actual rocket scientist in my group.

One of the things that I discovered was just how everyone has some core of similarity between us.  Five strangers came up with six common elements that we all shared and that was in less than a 5 minutes.  If we had more time I am sure we could have come up with a lot more.

The second exercise was to talk with the same group and come up with at least five things that made us unique that we accomplished in 2014.  This was quite interesting because we each had to think outside of the box to recall very unique things we accomplished this year that no one else had done. To me the most unique one was the guy who had flown a drone, of course that was the rocket scientist.
Hearing other people’s unique experiences allowed me to think of things I would like to do in the coming year that is just a couple of days away.
I challenge you readers to talk to some of your co-workers, friends, or loved ones and do a similar exercise.  Get into a group and come up with a number of things that all of you have in common that occurred in 2014.  Then come up with at least one thing per person that you did that was unique.
And the next time you are about to get into an argument or a disagreement with others just remember that we are all connected at some point.  Everyone has similarities to you and differences.
Have a wonderful New Year.
Kevin A. Dunlap

I Love You Man, the movie

No Sex Until Wedding Night