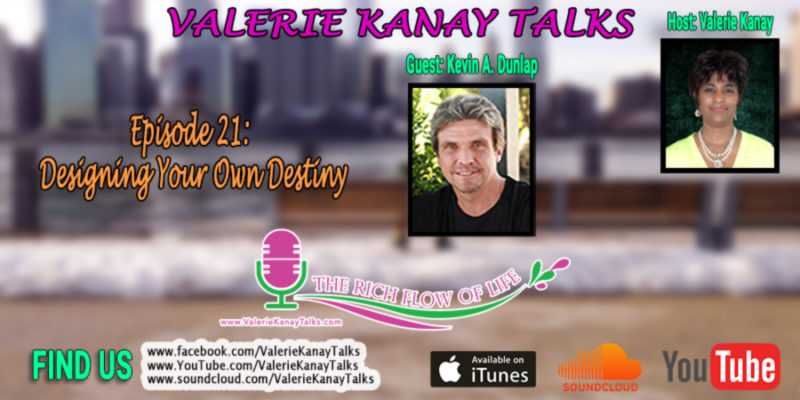 Valerie Kanay interviews Kevin A. Dunlap is the Author of the book, Designing Your Own Destiny; it is Embracing Change through Leadership and Love. This is the Guidebook and The Leadership Road Map to Succeed in Life and Business. Kevin is a Life and Love Coach, Professional Speaker, Trainer and NLP Practitioner Certified. Today he is creating Online Programs to help people achieve their goals in life, love and business.

This was my very first online interview.  I live in Las Vegas, NV and Valerie lives in NY (I believe).  I bought my first headset microphone specifically because of this show.

That mic works great until I upgraded to a new one in February 2018.  Thus, I used that microphone for multiple other people's podcasts and radio shows.  I still use it today for editing my own podcasts.

I was excited to be on her show as I was about to launch my second book Designing Your Own Destiny which can be found on Amazon.

I was so excited to get my initial interview and my first bit of coverage for my book.  This helped me realized to get my name out there and would allow me to actually start my own podcasts shortly later.

The name of my podcast was called Life's Little Lessons.  I believe we learn a lot from the little things that come our way.   Later on these first 19 episodes would be called Season 1.  These were all points or aspects from the book.  This proved to be a difficult process for me as I was inconsistent with the show about a month into it.  That was because of motivation on the content.

In October 2017 (one year later almost to the day) I would launch Season 2 which is the interview based show where I would interview other entrepreneurs.  Since content is being brought mainly by the guest, this made it much easier to record shows.

Now Life's Little Lessons has grown into a much larger audience and all of this started with this one interview.

Take a listen to it to see just where it all started.